The United Nations Children's Fund (UNICEF) is a United Nations program headquartered in New York City that provides long-term humanitarian and developmental assistance to children and mothers in developing countries. It is one of the members of the United Nations Development Group and its Executive Committee.

UNICEF was created by the United Nations General Assembly on December 11, 1946, to provide emergency food and healthcare to children in countries that had been devastated by World War II. Maurice Pate, American humanitarian and businessman, co-founded the United Nations Children's Fund (UNICEF) with Herbert Hoover in 1947. Pate served as its first executive director from 1947 until his death in 1965. In 1953, UNICEF became a permanent part of the United Nations System and its name was shortened from the original United Nations International Children's Emergency Fund but it has continued to be known by the popularacronym based on this previous title.

UNICEF relies on contributions from governments and private donors, UNICEF's total income for 2008 was $3,372,540,239. Governments contribute two thirds of the organization's resources; private groups and some 6 million individuals contribute the rest through the National Committees. It is estimated that 91.8% of their revenue is distributed to Program Services. UNICEF's programs emphasize developing community-level services to promote the health and well-being of children. UNICEF was awarded the Nobel Peace Prize in 1965 and the Prince of Asturias Award of Concord in 2006.

Most of UNICEF's work is in the field, with staff in over 190 countries and territories. More than 200 country offices carry out UNICEF's mission through a program developed with host governments. Seventeen regional offices provide technical assistance to country offices as needed.

Overall management and administration of the organization takes place at its headquarters in New York. UNICEF's Supply Division is based in Copenhagen and serves as the primary point of distribution for such essential items as vaccines, antiretroviral medicines for children and mothers with HIV, nutritional supplements, emergency shelters, family reunification, educational supplies, among others. A 36-member Executive Board establishes policies, approves programs and oversees administrative and financial plans. The Executive Board is made up of government representatives who are elected by the United Nations Economic and Social Council, usually for three-year terms. 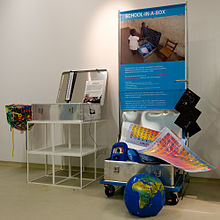 Recent executive directors of UNICEF includeCarol Bellamy (1995–2005), a former head of the Peace Corps, and Ann Veneman (2005-2010), a former United States Secretary of Agriculture whose mandate included increasing the organization's focus on the Millenium Development Goals. Since 2010, the current Executive Director of UNICEF has been Anthony Lake, a former US National Security Advisor.

UNICEF is an intergovernmental organization (IGO) and thus is accountable to those governments. UNICEF’s salary and benefits package is based on the United Nations Common System.

UNICEF is funded exclusively by voluntary contributions, and the National Committees collectively raise around one-third of UNICEF's annual income. This comes through contributions from corporations, civil society organizations around 6 million individual donors worldwide. They also rally many different partners – including the media, national and local government officials, NGOs, specialists such as doctors and lawyers, corporations, schools, young people and the general public – on issues related to children's rights.

In the United States, Canada and some other countries, UNICEF is known for its "Trick-Or-Treat for UNICEF" program in which children collect money for UNICEF from the houses they trick-or-treat on Halloween night, sometimes instead of candy.

UNICEF is present in 191 countries and territories around the world, but not involved in 9 others (Bahamas, Brunei, Cyprus, Latvia, Liechtenstein, Malta, Mauritius, Monaco, and Singapore). UNICEF designated 1979 as the "Year of the Child" and many celebrities including, David Essex, Alun Davies and Cat Stevens gave a performance at a benefit concert celebrating the Year of the Child Concert in December 1979.

Many people in developed countries first hear about UNICEF's work through the activities of one of the 36 National Committees for UNICEF. These non-governmental organizations (NGO) are primarily responsible for fundraising, selling UNICEF greeting cards and products, creating private and public partnerships, advocating for children’s rights, and providing other support. The U.S. Fund for UNICEF is the oldest of the National Committees, founded in 1947.

In 2009, the British retailer Tesco used “Change for Good” as advertising, which is trademarked by UNICEF for charity usage but not for commercial or retail use. This prompted the agency to say, "it is the first time in Unicef’s history that a commercial entity has purposely set out to capitalise on one of our campaigns and subsequently damage an income stream which several of our programmes for children are dependent on”. They went on to call on the public “who have children’s welfare at heart, to consider carefully who they support when making consumer choices”.